There are plenty of transportation options for getting around Peoria! It's easy to jump to any part of the greater Phoenix area thanks to our network of freeways featuring carpool / HOV lanes. Peoria has a Park and Ride facility located downtown, which offers a secure place for commuters to leave their car or bicycle and catch an express bus to downtown Phoenix. There are also several Valley Metro bus routes to connect you to local destinations.

The nearest large commercial airport is Phoenix Sky Harbor International Airport, which is approximately a 30 minute drive from Downtown Peoria. 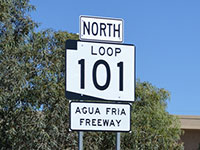 There are miles of bike lanes and multi-use paths in the city for cyclists to enjoy. View a map of hiking trails in Peoria (PDF).

Peoria has multiple fixed bus routes as part of the Valley Metro system that connect to other valley cities. Starting in 2019, Peoria also has a local circulator bus route called Peoria On The Go (POGO).

Dial-a-Ride service works with the existing transit system to provide demand-responsive transportation to people who are unable to use local bus service due to a disability.